On January 28th 2020 the Erasmus+ project group visited the “Fichtebunker” in Berlin-Kreuzberg. The exhibition was organized by the Berliner Unterwelten e.V. Here is what we have learned:

The “Fichtebunker” is located in Berlin-Kreuzberg in the Fichtestraße 6, 10967 Berlin. The nearest metro station is U-Südstern. Tickets for the exhibition can be bought here:

From Gasometer to Bunker
The history of the facility is 200 years old. 1820 the Fichtebunker was one of four Gasometers in Berlin. Gasometers provided gas for the newly installed lanterns in the streets of Berlin. Around 1936 electricity was needed more and more. As a result the gasometers weren’t needed anymore.

As a reaction to the London bombardments, Berlin was bombed by the British air- force for the first time in August 1940. In order to convert the gasometers to bunkers, the so-called “Bunker Sofort Programm” was introduced and after five years without any use, one of the four gasometers was converted into a bunker. The bomb shelter was designed for mothers and children to provide them protection during airstrikes in the 2nd World-War. For the costs of 5 million Reichsmark (about 50 million of Euros today) the ‘Fichtebunker’ was designed for just 6500 people – for a very small percentage of the population of Berlin.

Construction
The “Fichtebunker” has an area of 8500 m2 was designed for about 6500 people. The highest priority was given to mothers who worked in the military industry. The more children they had, the higher their priority was. The facility has six floors, 600 cabines in 30 sectors and five sectors per floor. The bunker had two medical rooms which were arranged symmetrically in the ground floor. The ventilation shaft was and is still located in the center of the bunker. Sanitary facilities were located around the core of the bunker. The shelter cabins were intentionally designed to be far away from the ventilation system to protect the people from the ventilation noise.

Fichtebunker during airstrikes
If an enemy bomber was heading to Berlin and reached Braunschweig, Berliners had only 20 minutes to seek shelter in the bunker. The Fichtenbunker had two paramedical rooms in which 32 persons could be treated at once if necessary.

People were allowed to enter at 6 pm and had to leave at 9 am in case there was no danger anymore. If a registered a person was missed for more than five nights in a row, they were declared „missing“ or considered „dead“ and the keys for their room were reassigned to other people in need.

Although the “Fichtebunker” was designed for about 6500 persons, 35000 persons found protection during very intense bombings. The ventilation system was able to supply about 80 000 people though.

The Bunker in the post World War II-era
After the end of the war reconstruction work and the search for food had begun. Old people who couldn’t take care for themselves were housed in the former bunker, run by the city of Berlin. They slept in the old bed rooms and received two to three meals per day.

In 1956 the “Fichtebunker” became a shelter for homeless people. But after violent incidences and continuous problems it was finally closed.

After West-Berlin was dependent from the American Candy Bombers for eleven months during the Berlin-Blockade the Senate of Berlin stored canned food in 700 places throughout West-Berlin to not be dependent on help from outside for half a year again. One of the 700 places was the Fichtebunker. The operation was later known as “Operation Squirrel”.

After that, the senate thought about how to use the facility . Suggestions were a teenager hotel, an amphitheater and a supermarket. Because of the high costs of the realization of these projects the ideas got discarded.

In 2006 the Berliner Unterwelten e.V. tidied the messed up former bunker and rearranged the facility to take visitors on a journey through the past. Also there are 13 luxury apartments on the roof of the bunker which can be reached with an elevator and a bridge next to the bunker. 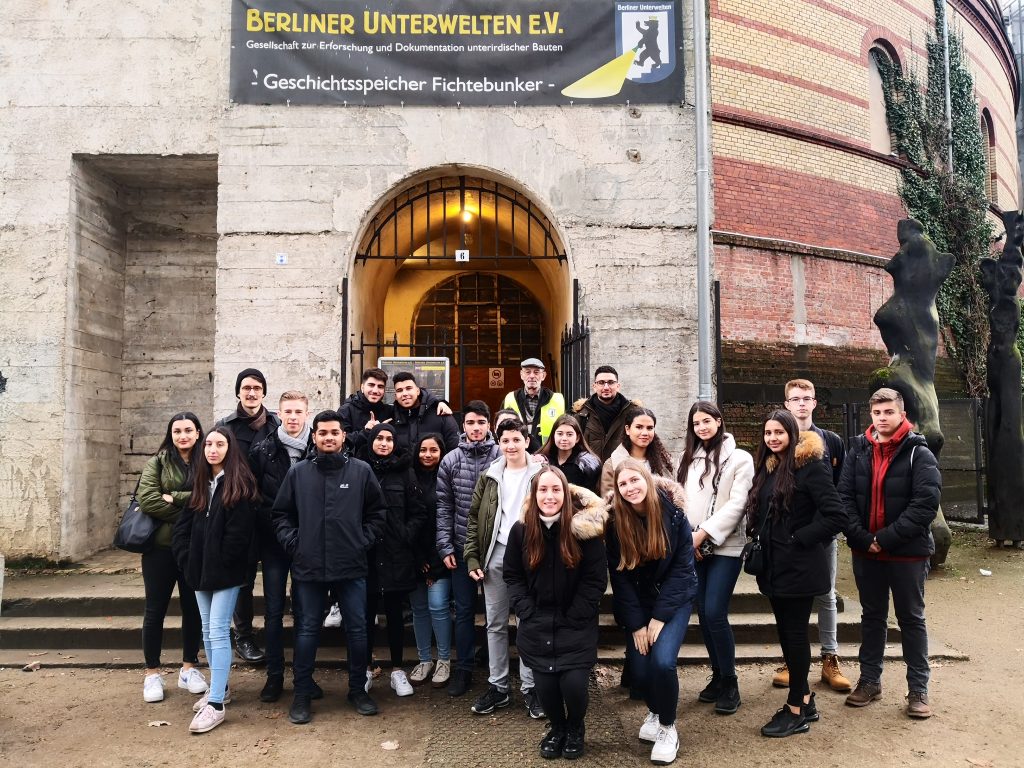 The Erasmus+ Project group in front of the Fichtebunker